Looking Behind the Scenes 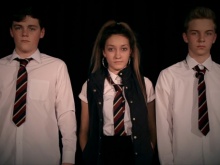 Hatty (centre) along with two characters from the film 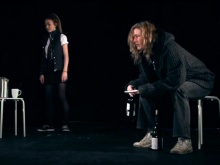 A scene from Hatty's story 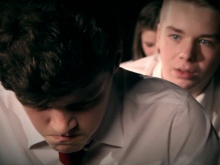 Another shot from the film

A Brighton Fixer, who wants people to consider the reasons why some youth may behave anti-socially, has completed her film depicting the stresses young carers often face.

Hatty Berry (16) enlisted the help of a whole range of actors and actresses from around the country to complete her film, entitled “Behind the Scenes”.

Filmed at the Old Market Theatre, Brighton, Hatty's film follows the stories of three main characters who appear to be disengaged at school, each of them acting anti-socially in their own way.

After the scene is set, the camera goes ‘behind the scenes’ to reveal their home lives, showing why the character may be having problems at school.

Hatty's inspiration for the film came from her own life as a young carer.

The Fixer cares for her mother, Shona, who has a condition called Fibromyalgia which leaves her with severe muscle pain over her entire body, often incapacitating her.

Because of this, Hatty has to juggle caring for her mum with schoolwork and a social life, and this stress sometimes affects her behaviour and performance at school.

‘I would act out at school,’ says Hatty, ‘and sometimes I would not be too attentive. But the reaction from my peers was terrible, and often I would be bullied or targeted.

‘Sometimes people would assume I am tired and just tell me to get over it, but it was never that simple. All the time, something was going on outside of school which made me like this.

'People just did not see it, and I hope that through this film young people in particular will think twice before they judge somebody else, and actually consider the reasons behind someone’s behaviour.’

Hatty plans to take her film to the police and professionals who work with young people in her area to use as a resource when dealing with people who may be involved in anti-social behaviour.

You can watch Hatty’s film at the top of this article.