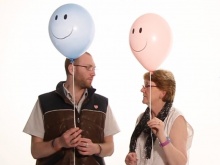 Noel and his mum, Margaret, with balloons 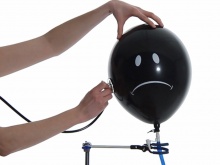 One of the ill balloons

A Fixer, whose mother began behaving strangely due to an undiagnosed brain tumour, has completed his film highlighting the symptoms of brain tumours.

Two years ago Noel Moss’ (24) mother, Margaret, was told she had only two weeks to live if a large brain tumour was not immediately removed.

Margaret has now made a full recovery, but if Noel and his brother had not identified the symptoms of the tumour, it could have proved fatal.

Noel’s film uses different coloured balloons to retell his experience of discovering that his mother had a brain tumour.

The Fixer from Cheltenham thinks his Fixers film will raise awareness of what to look out for, and will encourage people who have symptoms of a brain tumour to seek help immediately.

‘It was so sudden and unexpected. Mum had been acting a little strange, but we would never have guessed it was a tumour,’ says Noel.

‘I hope that through this film more people will be aware of brain tumours, how to look out for the signs of them, and how seeking help can save a life.'

Noel hopes brain tumour charities will use his film, and is holding a screening of his film to the public and representatives from local charities on Tuesday 4th June at 3:00pm and Gloucester Guild Hall, 23 Eastgate Street, GL1 1N3.

Find out more about Noel’s Fix by clicking the links below or click here for more information on brain tumours.