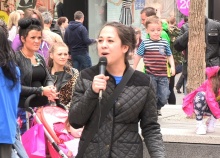 Fixer Billie talking to the crowd at event

A Liverpool Fixer had the public clapping along to her organised flash mob, which took place this past weekend and aimed at promoting gender equality.

Billie Deen Owen’s spontaneous street event on Saturday 9th May saw 25 young men and women, clad in colourful t-shirts, dancing in unison to show the power of harmony and togetherness.

With the help of Fixers, the 23-year-old was able to organise the event, which involved five flash mob performances at different locations across Liverpool.

The street-dancing participants included both young women and men to visually demonstrate the two genders working together towards equality.

Speaking about the event, Billie says: ‘We had a great time and it went even better than we could have expected.’

Billie was inspired to get involved with Fixers after seeing a spate of news stories about abused women and becoming passionate about women’s rights.

She thinks women are treated differently to men across cultures and wants more women to stand up and be counted.

Being half British and half Indian-Pakistani herself, Billie says:

‘There is a difference between men and women not just in either of these cultures but generally speaking in other backgrounds, too.

‘I just feel as though there's so much inequality in the world and I want to focus on where women see themselves in today's society and culture, and compare this to what others think around the world.

‘I want every girl to know what feminism is, how they can apply it to their lives and gain a better quality of life.

‘I want to thank Fixers for their help with the flash mob and hopefully we got the message out to as many people as possible.’