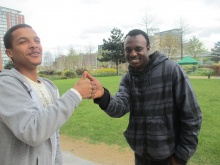 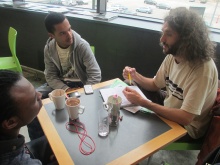 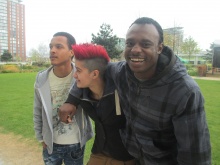 Mario and Peter with YPC Mariam

A former gang member from Droylsden, Manchester - who was almost shot during an attack - is creating a film with Fixers to encourage young people to stay away from a life of crime.

In his younger years, lead Fixer Mario Carroll (22) wasn’t always on the right side of the law.

On the verge of going to prison and affiliated with a gang, the Fixer finally decided to turn his life around two years ago, after being ambushed and almost shot by rival gang members.

‘It was the first time I found myself praying and begging God to save me, because I didn’t want to die,’ Mario explains.

‘I was beaten up badly and remember there was blood everywhere – I’ve never seen so much. Then I had a gun held to my head and thought that was it for me.

‘At that moment I knew that if I survive this, this wasn't the life I wanted to lead. If it wasn’t for the help of quick-thinking friends, who managed to save me, I wouldn’t be here.’

Now a father, Mario has put his energy into youth work and helping young people make the right choices.

Through his Fix, Mario wants to address the factors that lead young people to gang involvement, drugs, and unemployment.

He has seen close friends die in gang feuds and wants to make a film showing the true realities of a life of crime.

The Fixer also has a passion for music and regularly writes his own songs as an emotional outlet.

‘Crime just used to be the norm for me back in the day, but I’ve changed now,’ Mario says.

‘The real and only way of expressing and releasing all that anger, pain and fear was through music, which I have always fallen to when times are bad. I guess music heals the soul.

‘There is no doubt about it. If you’re in a gang, the chances are you will die early. So by working with Fixers, the more people I can reach out to, the better.’

Also helping with the campaign is Peter Nzekwu (26), who moved to Manchester from London after being involved in gangs himself.

‘We both have a lot of things in common and I find I’m able relate to him, because I’ve been in that situation myself,’ explains Peter.

‘We want to make an impact on the minds of youngsters with positive messages.

‘Having seen what gang life is like, we have a responsibility to make a difference and discourage as many people as possible away from that life.’