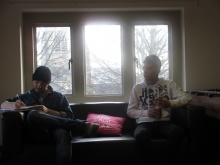 A reformed ‘bad boy’, who has put his life of crime behind him, is creating a Fixers film to warn other youngsters against a life of crime.

Self-confessed former teenage tearaway, Mohammad Awais, is teaming up with Fixers to create a motivational film using his own experiences of prison life to inspire teenagers to make something of themselves.

The 18-year-old from Bradford was involved in various crimes from a young age and felt it had a lot to do with his mum and dad separating when he was 10 years old.

Whilst in prison, Mohammad began to realise the consequences of his actions.

He began to seriously contemplate what would become of his life.

‘A lot of young people take the crime route as it is seen as easy and better,’ he says.

‘I want to stop young people getting involved in crime and to divert their energy into a positive outcome.

‘It was a very hard time for me growing up because my parents split and my best friend passed away.

‘I want to change young people’s opinions and attitudes with regard to education so that their future is bright and they can utilise their potential.

‘I chose a life of crime and have had to experience the effects this has had, not only on my life but those around me. Now trying to get my life back on track is proving so difficult, not only getting a job but also trying to study.’

Mohammad, who is studying for an A Level in Business Studies, insists it’s more effective when young people hear advice from the mouths of other young people, their own peer group, rather than adults, parents and professionals.

He aims to start his own T-Shirt printing business and feels, for the first time, his life is turning around.

‘It’s very hard, when you’ve got a criminal record, to find a job and I want other young people to realise this,’ Mohammad adds.

‘Pain is temporary but pride is forever, and this is my message to anyone else out there.

‘Everybody makes mistakes in life and I’m no exception. It’s how you come back, and this is me coming back.’