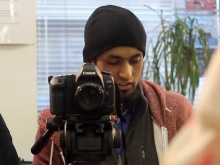 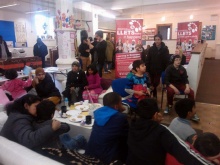 All the attendees at the event 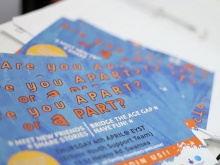 A Fixer determined to decrease the generation gap within families in Swansea has hosted his first workshop and begun filming his campaign DVD.

Swansea Metropolitan University student Mustak Abdul (22) feels there is a lack of communication between younger and older generations in families and ethnic groups, and this often leads to misunderstandings.

Equally, Mustak is concerned that younger family members therefore disregard the opinions of their elders.

With the help of Ethnic Youth Support Team (EYST), Mustak conducted filmed interviews with families at his workshop about topics such as integration and ambitions in order to get them communicating better.

The interviews are currently being edited and will be published on a DVD, which will then be screened to local groups to encourage better communication across generations.

Mustak hopes he can continue events like this in the future: ‘It was a fantastic and successful event, and I was amazed by how many people turned up.

‘It showed that problems with communication are a real problem to some groups, and I hope events like this can unite families from within their cultures, and across different cultures and age groups.’

Mustak’s Fixers DVD will be complete in May.