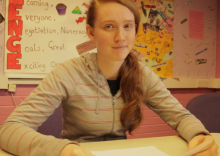 A former victim of school bullying has completed a film, which encourages victims to find comfort through creativity.

Kat McCluskey of Cramlington, Northumberland made the emotional film, which will be premiered next week, telling the story of a girl who was bullied but found a release through dance.

Her film will be shown on 23rd April 2013 at the Cramlington Voluntary Youth Project (CVYP).

The 21-year-old was bullied all through high school and found it difficult to talk about it. For her Fixers project, she was reunited with 14-year-old Isabella Troy, whose poems motivated her in hard times.

Speaking about what she hopes the resource will do, Kat explains: ‘Working with Fixers has been great and I hope our film will inspire others out there to find out who they are through something they enjoy.

‘Showing the film to children and teachers will be a great way of raising awareness around school bullying too, and hopefully help teachers spot the signs quicker.’

The short film follows the narrative path of a poem written by Isabella herself.

The idea is to show how poetry can be used as a way to ‘express yourself’, and also be a form of self-help like it was for Kat.

The location for the premiere - the Cramlington Voluntary Youth Project - was a sanctuary for Kat, who used to help out and share her experiences there when she was younger.

She says it’s fitting that the film will be played at the CVYP where she was inspired as a youngster.

‘I genuinely found helping out at the Cramlington Voluntary Youth Project a pivotal part of my growing up,' she adds.

‘It allowed me to be myself and speak to others, many of whom could relate to my experiences.

‘I also want to use this film to play at future workshops where young people can come and express themselves through creative means.’

You can view Kat’s Fixers film above.