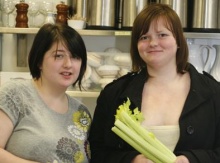 A group of young mums and mums-to-be from the YWCA in Tonbridge, Kent, have become Fixers to help other parents feed their children healthily.

The group feels that a lot of first-time parents have little knowledge of how to cook on a tight budget.

With the help of Fixers, they developed a series of easy-to-follow nutritious recipes and a broadcast film for screening in schools, local community centres and antenatal classes.

Lead Fixer Rachel McHale, 24, admits: 'I’ve never learned how to cook. I just experiment when I’ve got the time.

'A lot of young mums will just get things you can bung in the oven.  That’s not really very healthy, and can be expensive.'

Sherry Merchant, 22, agrees. She used to cook junk food, because it’s 'easy to get fish and chips and put some beans in a pan' but worried about her son becoming overweight.

The Fixers’ film was used by the YWCA to win a grant from Tonbridge and Malling Borough Council to hold a series of cookery classes for young parents. Practical lessons included how to cook nutritious food on a budget, understanding the government’s 5-a-day directive, and healthy alternatives to children’s sweets and additive-laden snacks.

Kaylie Coombes (22) is delighted their initial project has resulted in the courses.  'It’s great to see it all happening. I took part in the first course and now we’re all really keen to do advanced classes now.

'We want to try harder recipes with try different varieties of food. I used to mainly cook from packets – just stick it in the oven. Now I feel healthier, have more energy and am more relaxed about food.'