Drink, Can You Handle It? 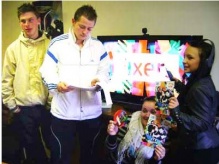 More than 40 Fixers from Portsmouth are uniting to create a series of high impact short films about the effects of alcohol abuse on young people.

Lead Fixer Gemma Riley (18) and her group of Fixers all feel strongly that alcohol abuse amongst the young people of Portsmouth is getting out of control.

With 16 – 24 year olds drinking more heavily* than any other age group in the UK, they’ve decided to take action.

'We want to show the seriousness of alcohol abuse and the fact that it’s not all fun and games and what can happen to you if drink too much,' Gemma explains.

With the help of the Fixers Creative Resources team, they’ll be producing and acting in a series of hard-hitting short films, which will look at the consequences of alcohol abuse; from violence and dependency to issues surrounding impaired judgement and peer pressure.

'I have four friends under the age of 18 who have all fallen pregnant, because they’ve had unprotected sex when drunk,' explains Gemma.

She hopes that the films will make viewers think twice before they drink.

They feel that often alcohol awareness campaigns are too soft and want to shock young people into taking notice.

They’ll be targeting the film at 16 – 25 year olds in and around Portsmouth, and want to show the film in secondary schools, colleges and to university students. They also hope to distribute the films online.