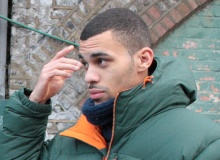 Fixer Luke at the film shoot 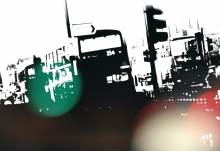 Black and white shot of London

A self-confessed former teenage ‘bad boy’ is hoping his completed film will deter young people away from a life of crime.

Luke Kirkland, originally from Hackney, highlights the importance of saying ‘no’ to gangs.

The 22-year-old’s film guides viewers through an area of Hackney, encountering various situations that a youngster living in the area may encounter on a daily basis.

Luke himself grew up in care, but since studying Youth and Community Work at University in Wales, is keen to help children better themselves.

He is very happy with the outcome of the film, saying: ‘Everything went really well.

'We wanted to portray two situations, namely knife crime and drugs while not losing sight of our message - "There’s always another way."

‘I hope the film inspires more young people to make something of their lives.

‘There is no opportunity to mix with other young people and experience new things in certain areas, and that’s what I want to change.

‘If the film can change one person’s life, it will be worth it.’

Rather than stereotyping all youngsters from Hackney, Luke wants his film to help those who are subject to peer pressure and give them hope to take another direction.

‘The whole experience has been great and I hope to show the film to young children so they hopefully grow up to make the right choices in life,' he adds.

‘Society says that youngsters, who come from areas known for crime, won’t go on to do anything with their lives. But this is what I’m fighting to change, and one day it will change.’

The gripping film, which you can watch above, is set to premiere next month.