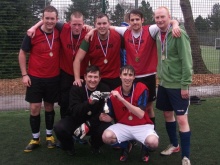 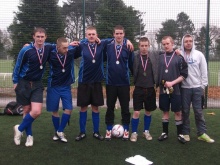 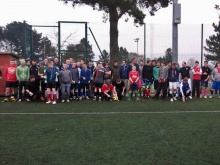 Everyone on the day

Over 60 people attended a football tournament hosted by a keen footballing Fixer, who aims to bring young people in the city of Exeter together.

Conon Adamson (19) says he was ‘overwhelmed and pleased’ with the response to his Fix.

He was inspired to hold the friendly football tournament, which encouraged new friendships between people aged 16-29 years, because he felt there was a lack of integration between young people in Exeter.

Despite bad weather, the five-a-side tournament kicked off on schedule and featured 12 teams who battled it out for footballing glory.

After a gruelling tournament, local team MNF lifted the trophy after defeating runners-up The Amber Boys 3-1 in the fiercely competitive final.

‘It was a fantastic day,’ Conon says.

'I expected it to be popular, but not to this level. By using football, where teamwork is important, it showed just how willing people from across the city are to get in touch with one another.’

Conon wasn’t the only person who enjoyed the event, which took place at Exeter University Sports Park and was attended by representatives from the Devon Football Association and Exeter City Football Club.

‘What was most pleasing was the spirit in which the matches were played,’ says Jason Haywood, a tournament attendee.

‘Teams and referees were on the same wavelength throughout the matches and this helped everyone really enjoy themselves.’

Conan plans to hold the football tournament again next year and has met with his local Councilor, Sarah Laws, who has agreed to help Conon apply for funding from Exeter City Council.