Hoodies Are For Wearing 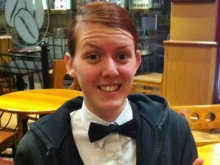 Ellie smiling into the camera 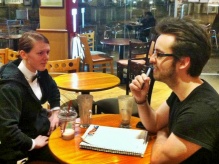 A young woman who feels people are unfairly stereotyped for wearing hoodies is holding a unique flash mob event in Cardiff to show how wearing a hoodie does not make you a different person.

Ellie Walsh (18) believes that many people change their behaviour when they see someone wearing a hoodie, which is usually completely unnecessary.

The flash mob in Cardiff City Centre will see young people dancing while wearing hoodies, before being joined by older people who are also wearing hoodies.

‘The point is to show that anyone can wear a hoodie,’ she says.

‘It does not matter who wears it. What matters is how people who do wear them are misconceived as “trouble makers”.

‘Some young people are harassed by older people who think that wearing a hoodie means they are out to do something wrong. Instead of this stereotyping, I want people to realise that hoodies are just different items of clothing and do not mean a person is bad.’

Since its rise to popularity in the UK in the 1990s, the hoodie has been associated by some with anti-social behaviour, and was even banned in 2005 in Bluewater Shopping Centre, London, as an attempt to crack down on petty crimes.

The hooded flash mob will take place in Cardiff City Centre on Saturday 27th April. A booklet including key statistics and information about the hoodie phenomenon is also being produced for the event.