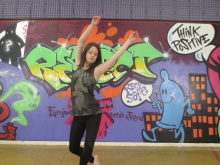 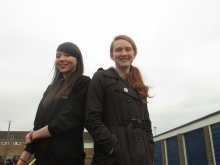 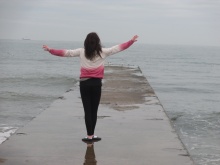 Inspired by her friend’s passion for poetry, a former victim of school bullying is channelling her creativity through a short film to help prevent others from being bullied.

Kat McCluskey of Cramlington, Northumberland is producing the emotional film, which tells the story of a girl who was bullied, but releases her emotions through dance.

‘I think everyone has been bullied at some stage,’ Kat explains.

‘It has been strange working on a Fixers project that you can identify with, because you know you’ve been through it, but it’s about moving on from the upset and not dwelling on the past.

‘I want to give something back and help people who are in the same place I once was.’

Kat (21) experienced bullying all through high school and found it difficult to talk about it. For her Fixers project, she was reunited with 14-year-old Isabella Troy, whose poems motivated her to find comfort through creativity.

‘It was nice seeing Isabella again,’ says Kat. ‘It was her poems that struck a chord with me in the first place. I’m pleased she is on board with the project.’

The short film follows the narrative path of a poem written and read by Isabella.

The idea is to show how poetry can be used as a way to ‘express yourself’, and also be a form of self-help.

‘I really wanted to get involved with the project,’ Isabella explains.

‘Not just because it would be a great experience, but because if my poem can help just one person, then that's make me unbelievably happy and would help me keep writing.’

As well as creating a film, Kat eventually wants to set up creative workshops where she can invite young people to come and express their emotions through creativity.

‘I tried everything at school - singing, dancing and acting to name a few. But I found writing was a good way to escape as nobody can judge you. It’s just you and your pen,’ she says.

‘I think doing workshops would be a more engaging way of offering young people to show how they feel through something other than just talking about it.'

The film will be completed later this month and will be shown in conjunction with Kat's creative workshops in Newcastle.