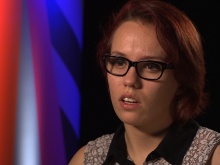 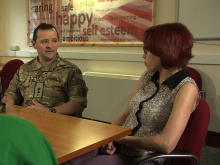 A group of young people from Plymouth, whose parents are regularly deployed in the armed forces, are creating a short film to encourage their teachers to be more sensitive to the challenges of being a ‘service child’.

Lead Fixer Laurie Foxcroft experiences regular changes to her family dynamics as her step-father is a Submariner with the Navy, and is often deployed overseas for periods of six to nine months.

This places stress on the family and leads to more responsibilities for Laurie.

The 17-year-old says she becomes a part-time parent when her step-father is away, as she has to help her mother look after her sister.

‘When it is time for deployment, the situation at home changes. We all feel more stress and strain. But it is not just deployment that is challenging.

‘When he is going through R&R [rest and recovery], and when he returns, we all still feel strained as we’re nervous about when he may be deployed again.

‘I feel like I should not become close to him because I know he will just go back again.’

Laurie finds these worries often disrupt her education, yet she feels teachers do not appreciate her situation.

‘Making friends is hard because you never really know how long you will be somewhere, and with the added responsibilities, it’s hard to maintain a social life.

‘This is why I am making a short film to show how deployment affects “service children”, so young people who are affected by this can be treated with the sensitivity I wanted.’

In the broadcast story, Laurie and her group - who are youth ambassadors for HMS Heroes - discuss how the deployment cycle affects them, and speaks with Lieutenant Colonel Dawes who has two children of his own and understands the effects of deployment.