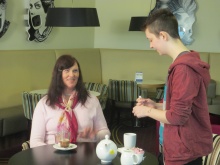 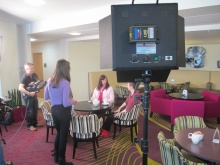 The filming crew shooting a scene 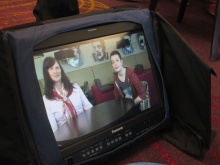 In the spotlight, Jenny Anne-Bishop with Alfie Austin

Alfie Austin came out as trans at the age of 18 and now wants to change the prejudice around transgender people as well as society’s negative stereotypes.

Alfie says he always knew he was ‘different.’ Born female, the 19-year-old came out a year ago and explains just how his life has changed.

From losing close friends who couldn’t come to terms with his new life to having to quit a job, Alfie’s life as a male hasn’t been without challenges.

One such example of discrimination came during a night out with friends.

Alfie was refused permission to use the male toilets, because the attendant thought he was female. Upon going to the female toilets, Alfie was followed by a bouncer and dragged out of there too.

‘It was so embarrassing,’ he explains.

‘I went to the owner who told me to use whichever I felt comfortable in, but didn’t take responsibility for what happened or advise his staff to let me use the men's, so I ended up having to go home.'

Jenny-Anne Bishop (66) is a well-known supporter of transgender issues and has been campaigning for transgender rights for many years. As a transgender person, Jenny-Anne fully stands behind Alfie’s campaign.

‘There is discrimination out there, but it’s more of a subtle type that exists now,’ she explains.

‘I have been made redundant from my job five times, which I believe was down to the fact that I am transgender. There has been progress from when I was younger but there is still work to be done.

‘My advice to Alfie and anyone else out there who’s in a similar position is stay true to yourself.

‘Whenever I feel someone is looking at me in a funny way, I find it easier to go up to them and start a conversation.  I’ve found it’s hard for people to be nasty to you if you’re nice to them.’

Alfie adds: ‘My coming out as trans has been met with mixed emotions. I would love the opportunity to tell my story and help others in a similar situation to me.’