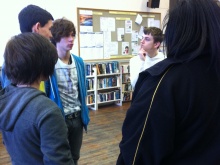 Group of Fixers speaking in circle 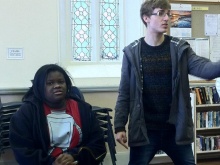 Social media may allow you to stay easily connected with friends - but with more people online, it can also result in being contacted, pestered, and even followed by people who you would rather avoid.

Cyber-bullying is a modern-day problem, with almost 40% of young people in the UK claiming to have been cyber bullied according to statistics from the National Society for the Prevention of Cruelty to Children (NSPCC).

Now a group of Fixers from Peterborough want to put a stop to cyber-bullying, and are doing so through a unique interactive play.

The play will follow the story of a victim of cyber-bullying, but will also immerse the audience into the story.

This will be done by encouraging them to send their comments via Twitter to a ‘tweet wall’.  These tweets will display throughout the performance, allowing the audience to see the effects of cyber-bullying on the characters.

The group want to speak out against cyber-bullying after members of the group saw the impact of this bullying on people they know and, in some cases, on themselves.

Lead Fixer Glen O’Gorman (18) explains: ‘We want to show just how harmful cyber-bullying can be. A lot of the time people do not consider how what they say online affects the victim behind their screen.

‘We are planning to show the effects through an interactive play, which will deal with the issue of cyber-bullying, and adapt throughout in relation to the comments the audience are leaving.

‘This will show the consequences of cyber-bullying, and allow the audience to see how their words influence the characters and their feelings – something a bully does.’

The team are currently scripting and rehearsing the play. Once complete they will tour schools in Peterborough to make young people aware of cyber-bullying.