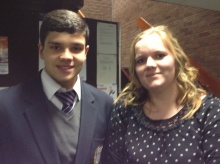 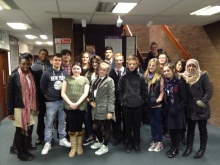 The group at Bexley Youth Council

A sixth-form mentor, who was devastated to see one of her pupils smoking underage, wants to warn young people about the dangers of smoking.

Lead Fixer Michelle Tiley (17) fears young people have a throwaway attitude towards smoking and are not aware of the effects smoking can have on them.

Michelle works with the Bexley Youth Council Group, London, who offer advice to young people who may be experiencing a variety of problems and pressures in school.

Their work is mainly with young people in secondary schools (11 to16-year-olds), an age group which Michelle feels carries a lot of peer pressure to start smoking.

‘I saw one of the pupils I mentor smoking one day, and I was completely heartbroken. He had never smoked before and did it entirely because of peer pressure.

‘Not only is underage smoking illegal, but young people do not understand the impact smoking has on their health. They do not consider the effects it will have on them in, say, 30 years.’

It is illegal to sell tobacco to people under the age of 18 in the UK, but the minimum age for possession still remains 16 years old.

Because of this, Michelle has seen underage pupils of hers smoke because their older friends will buy them cigarettes – some selling them to younger students for ‘just a few pence’.

With the help of fellow lead Fixer Dominic Pimlott (16), and their Community and Events group at the Bexley Youth Council, Michelle wants to create a DVD film which will show the effects of smoking demonstrated on puppets.

‘A lot of young people do join in smoking with others to fit in, but they do not know the ingredients inside a cigarette. They do not know what they are smoking, or what it is doing to them.

‘Once the film is complete, we hope to take the DVD to teachers in schools so they can include the film in their lessons,’ she says.

The film, which is currently in the production stages, will be completed in April.