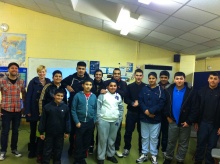 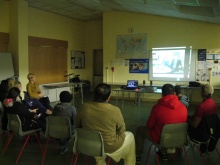 A reformed ‘bad lad’ is fighting for change by deterring other teenagers from violence in secondary schools.

Aqib Javed of Leeds regularly got into serious scuffles with other students at school, but he now wants to inform kids it ‘isn’t worth it’.

The 18-year-old lead Fixer wants to make a film, which shows the consequences of violence in schools.

Speaking about the project, he explains: ‘I used to get into fights all the time but, looking back, I do regret them.

‘I want to show that fighting in school can stay with you for the rest of your life: it can only take one punch.’

Aqib isn’t proud of what he’s done, but now wants to mentor young people who may be in the same position he once was.

‘All the fighting was having a negative impact my school work, because before I was doing really well.

‘It’s no good just losing it all of a sudden. We want to advise young people to take a step back and think about what their actions could lead to.’

Aqib’s Fix will bring together others from the Leeds community centre, which he has been visiting since he was three years old.

A keen runner and currently studying Sports Performance at college, the 18-year-old has left his past behind and is now well on the road to a career in the sports industry.

As well as spreading the message of peace over violence to as many people as possible, Aqib also hopes to be a role model at home.

‘I didn’t have an older brother to get me on the right track when I was younger. My younger brother is lucky he has me to guide him and offer him advice to avoid the situations I found myself in.

‘At the time, I didn’t really think about why I was getting into fights. But as you get older that voice of reason in your head gets a bit louder. I’m glad it did.’