Amy flipping through her art portfolio 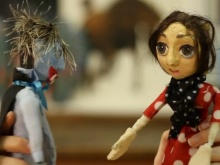 Puppets created by Amy for her film 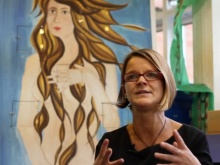 Through painting, drawing, and a little bit of imagination, Amy Mullen overcame her depression. Now she has captured her experience in a short film, which encourages others to control their demons through art.

The film (above) sees Amy talking about her struggles with depression, from her initial encounter with the 'teenage blues' to her eventual decision to leave her college studies.

She hopes her film will make others aware of the signs of depression, and offer young people some creative ideas about how they can control this mood disorder.

The 19-year-old artist first noticed her depression during her early teens, but assumed she was experiencing normal levels of sadness.

However, as she went through her teens, Amy realised she was experiencing different emotions than the people around her.

The depression became so intense it forced Amy to temporarily give up her studies. But she was given a lifeline thanks to her old school who, hearing what Amy was facing, helped her get back on her feet by supporting her to a BTEC qualification in Art and Design.

Through them, Amy went on to complete a range of creations all inspired by her battle with depression.

Speaking about her experience, Amy explains: 'It was really difficult to talk to someone and explain how I felt, so I started drawing. Art, for me, was a release.

'I could just get my ideas down on paper, and explain to other people what I could not get into words. It was what I turned to when I felt down.

'Everybody has emotions, but I think art is a great way of getting through those emotions. Even if you do not think you can draw, have a crack at it – you will be surprised what you can do.'