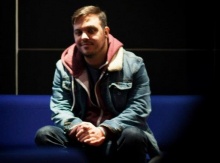 Shaun’s completed film about giving inspiration to jobless youngsters has been shown in his home town.

Shaun Phillipson (22) battled through months of jobless unhappiness after leaving his low paid construction job due to workplace bullying.

The determined young man from Newcastle worked with Fixers to produce a powerful film highlighting what being out of work can do to young people.

‘Down, Not Out’ is a ten minute drama based around Shaun’s experience of being unemployed.

It was screened at the Tyneside cinema in Newcastle and was followed by performances and discussions about unemployment with a focus on finding solutions.

These included rap artists and street poets who all backed the film’s message, which is to inspire young people not to give up their goals and maintain an open mind.

As well as a number of influential local organisations, local employers attended as well.

The young people talked about how inspired they were by the project and how they respect the ‘can do’ attitude.

Speaking about his film, he said: “I want to try and find other ways to develop skills and outline potential routes into work so that young people can avoid how I felt.

“I want to encourage people never to give up in life and pursue their ambitions. There is so much help out there for people who are willing to take the first step.”

You can watch the film above.