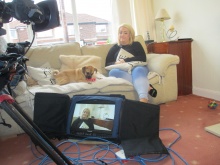 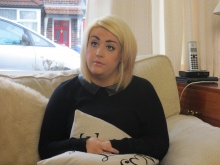 Becky Beaumont was only 21 years old when she suffered her first stroke but now wants to use her story, shown on ITV Granada News, to inform young people about the signs to look out for.

After going to a pub quiz with friends a year ago, the now 22-year-old went home to bed at 11:30 pm with no signs of illness. When she woke the next morning and reached for her phone, she could not move the whole of the left side of her body.

When Becky’s mum heard her scream, she ran into the room and saw that Becky’s face was drooping on one side. Speaking about the moment she knew something was wrong, Becky says: “It was scary. At first I thought I just had pins and needles but then I realised something was not quite right.

“I started panicking because I couldn't feel or move one side of my body. I was confused and the longer it went on, the more worried I got."

The ambulance was called and after tests in the hospital, doctors confirmed Becky had suffered a stroke.

At first Becky could not walk at all. Now she can manage to walk for about 20 minutes before she gets too tired to carry on. She also suffers from chronic fatigue, and has restricted movement in her left arm and hand.

Becky’s mum, Julie (51), says: “We are all so grateful for the amount of progress Becky has made since suffering the stroke.

“Things could have been so much worse and we’re glad we’ve still got her.”

Reality TV star and model Chloe Cummings is also passionate to get involved with Becky’s project, having had experience in the stroke unit while working as a nurse.

“It’s really of interest to me, and I think it’s good to raise awareness among a younger audience as everyone always presumes it only affects older people.

“The more people we can get on board with this, the better. If we could do something like an event, it would engage young people.”

Becky - who has been working the charity Different Strokes, which supports young stroke victims - thinks too many people do not realise that strokes can happen to young people too and wants to use this opportunity to inform and educate the public.

“Before this happened to me, I was kind of my own boss and did everything I wanted to — you think you’re invincible at that age.

“This has changed my life. When people ask me why I walk with a bit of a limp, they’re shocked when I tell them I’ve had a stroke because they don’t expect you can have one so young.

“I want to use my story as a way of showing it can happen to young people and raise awareness to save lives.”

For more information on strokes, please visit http://www.nhs.uk/actfast or www.strokeassociation.org.