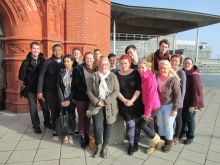 For the first time in Fixers history, the biggest thing for young people in the UK today comes to Wales.

The arrival of Fixers in Wales was heralded as “hugely exciting” by ITV presenter Jonathan Hill, who hosted the launch event at The Pierhead Building, Cardiff Bay, on Thursday 31st January.

“With Fixers, we’re talking about getting thousands of young people involved and that will create its own momentum,” he said.

"Wales faces a lot of challenges.  There are a lot of struggling communities here and I think Fixers is going to have an impact on that.  It’s tried and tested, we know it works.

“I have no doubt that Fixers will become a household name," he said.

Also at the event was Fixer Amy Mullen (19) from Cwmbran, South-Wales, who told the audience about how she found studying art helped her overcome depression.

She is working with Fixers to make a short film to inspire other young people to find creative ways of tackling stress related conditions.

Amy said: “I want to encourage more young people who may be affected by stress - particularly during exams - to explore their feelings through creativity.”

Thanks to help from the Big Lottery Fund, Fixers is expanding into new territory, and is being featured monthly in evening news bulletins throughout the ITV regions.

And, for our new Welsh audience, Fixers produced a small booklet containing information about Fixers which you can read in Welsh by clicking this link or read in English here.

This month’s featured Fixer in Wales is Scott McCarthy (19), from Newport, who is campaigning for greater understanding and support for lesbian, gay, bisexual, and transgender (LGBT) young people in Wales.

Scott was bullied in school due to his sexuality, and the homophobic bullying often spilled outside the classroom too.

He felt there was no support at the time for people who suffered from bullying, and he is now working with Fixers on his PRYDE (Pride, Rights, You, Difference, Equality) campaign to change this.

We see how Scott has made a film challenging LGBT stereotypes, and plans to create a web-based movement which ultimately becomes a charity to support people who may be facing difficulties due to their sexuality.