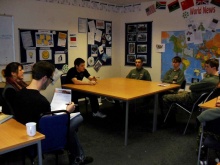 Students in South-Wales are campaigning to rid of the drug ‘meow’ from their area.

The group, who are from Rhymney, are concerned about the level of use of the drug in their area.

The drug, which is commonly known as ‘meow’, is a form of mephedrone - an illegal Class B stimulant which is claimed to produce similar effects to cocaine.

Lead Fixer Charlotte O’Connell (16) says a lot of young people in the area do not realise the harm they are doing to themselves with this drug and feel many people think it is just a bit of fun.

“Meow use has risen – nobody seems to be taking Heroin or other hard drugs like that, it is only Meow.

“Some members of the group have seen people in their teens take the drug, and even seen people as young as 11 or 12 take it too.”

Between 2008 and 2010, it was reported in the press that the drug was readily available at music festivals and nightclubs as a ‘legal high’ alternative to cocaine.

After deaths in the UK which were allegedly linked to the drug, the Government illegalised the drug along with the rest of the European Union (EU) in 2010.

However, the group of Fixers say they still see use of this dangerous drug in their area.

“We still see people use the drug relatively largely,” said Fixer Amy Thomas. “There is no information in our area about the drug and the damage it can cause, and that is what we hope to provide with our Fix.”

The group are making a short time-lapse film to show the damage meow can cause to a regular user, which will be completed shortly.

Meow in the Valleys on ITV Cymru Wales 5th Mar 2013