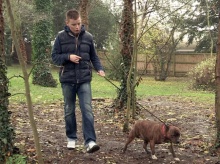 A close up of his dog looking happy

Zak (21) has tamed the most aggressive dogs, despite only having 20% of his sight. Where he lives in Peterborough, many dogs are abandoned or end up being destroyed due to their aggressive behaviour.

Working at a dog rescue centre, Zak sees a variety of dogs which have ended up in care, often due to mistreatment from their owners.

But even through the difficulties of losing most of his sight, Zak adopted one of the more notorious dogs – a four-year-old Staffordshire Bull Terrier named Taz. One-year later, Taz is tame and completely different to when he came into the rescue centre.

Now Zak wants to share his knowledge and experience with his dog training to encourage people to develop a greater understanding of dog behaviour.

“It’s a shame that so many dogs are put down or abandoned because of their behaviour, when sometimes the situation can be turned around with a little bit of care,” he said.

“Many dog attacks occur because dogs have been mistreated, and unfortunately these often injure young people who do not have a grasp of the body language of dogs.

“I have cared for many dogs, and despite difficulties, they have become excellent companions.”

Zak’s documentary is currently in the production stages, but he hopes the film will change the way young people and adults think about dog behaviour and ownership.

Speaking about his message, Zak said: “Owning a dog is a privilege, not a commodity, and it is important they are looked after correctly.”