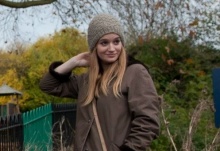 Georgina’s (24) film showing the effects living with an older parent can have in later life gets underway.

Georgina Trevor, from Bristol, was born when her father was 68-years-old. From a young age Georgina realised her father was older than all the Dads of her school friends.

This meant she lived in constant fear of his death, and she sought counselling during her teens to deal with her father’s ageing process.

She was just 15-years-old when he died aged 83, but felt no one understood the effects her father’s age and death had on her.

“Living with an elderly parent is different for many reasons,” she said. “It means that active things like playing in the park, piggy backs, and sports days are no go.

“You are very aware of how frail your parent is. It can also be embarrassing as you become more self-conscious and begin to realise the difference with your Dad."

Now Georgina hopes to reach out to others in a similar situation through her film, ‘When I’m 64’.

The film follows Georgina as she reflects on her life with her father, visiting places they used to go, and discussing the problems having an elderly parent can have on later life.

“It is tough to live a life with someone who you know will probably die before you are very old yourself. There is no proper support and professional understanding of this issue, and I hope I can help others with my experience so they do not have to experience the same lack of support.”