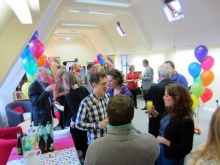 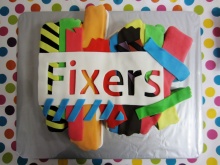 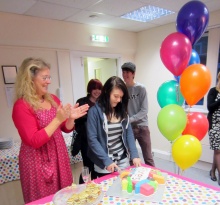 Fixers old and new, alongside representatives from the Public Service Broadcasting Trust (PSBT), and local figureheads, gathered with members of the Fixers team for a celebration of the first Fixers broadcasts.

With fizz, Fixers, and food - including a rather special Fixers cake - the evening was held on the same night as films from Fixers Jade Clement and Jennifer Byrne were broadcast on Meridian news.

Jade Clement - whose campaign to warn young people about the effects of cannabis was broadcast in Meridian West - attended the event to speak about her experience with Fixers.

"Working with Fixers has been an amazing experience," she said. "That was the first time I have seen my film, and I am really pleased with the results.

"Just to hear the young people in the film saying they have been put off drugs means I have achieved so much. I have been trying to tell my story for two-years, and Fixers has helped me in a few months."

You can read Jade's full story in the news item below.

And, in the Meridian East region, is Jennifer Byrne and her courageous story about promoting road safety following the death of her fiance. Read her story below, where you can also view the broadcast piece.