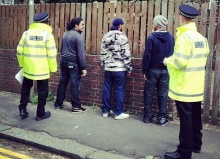 A group of Fixers from Stockwell, London, are making a unique film to inspire young people to stay away from gangs while changing the perception of young people.

Led by Fixers Dante Powell-Farquharson (22) and Mohammed Idle (21), the film – entitled ‘Breaking the Cycle’ - focuses on a London gang who are not exactly the most threatening.

“The perception of young people in London is very much that we’re up to no good a lot of the time,” he said. “I want to change the way people view young people by ridiculing the stereotype that we’re involved in gangs.

"Getting involved in gangs is stupid, but equally I want to show that young people stereotyped as being in a gang often have not choice but to act like they are in one. If they are told or treated differently, they often play up to this labelling.

“Despite the jokey appearance, there is a really serious message behind this film,” said Dante. “I wanted to show young people that it is not worth getting involved in gangs, and indicate that stereotyping people as 'gang members' is wrong, and can actually push people to act criminally."

Without much clue, hope, or real direction, the bumbling gang of criminals in the film become involved in increasingly stupid criminal scenarios, resulting in more and more trouble as their adventures escalate.

Dante was inspired to make the film with Fixers after he and his friends are often stereotyped as being in a gang.

“Because we are young, black, and mostly male, my friends and I are often misconceived as a gang. It has meant that we have been searched by police on many occasions, and have experienced racist abuse.

“The fact is that we are just a bunch of friends, and gangs are completely different. What I wanted to show through this film is not only that stereotyping is wrong, but the gang we are being stereotyped as is wrong, too.”