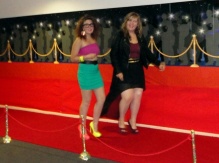 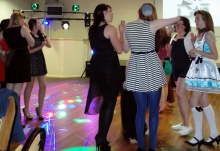 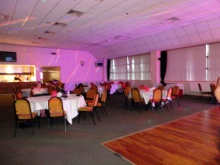 The team of Stoke-based Fixers behind the film ‘Spread the Word’ have premiered their film at a red carpet ceremony to a whole host of special guests.

The film, which highlights the importance of safe sex, was shown at a special screening at Port Vale Football Club’s ground to around 50 people, including members of local schools and sexual health clinics.

With a fancy dress theme, food and drink, and a red carpet entrance complete with a professional photographer, the event had the feel of a Hollywood film premiere.

Lead Fixer Kirsty Gaunt (16) – who dressed up as Katy Perry for the night – said: “It was such a great evening, and a really memorable way to celebrate all the hard work we have put in.

“Reception to the film was overwhelmingly positive. It feels great to know we are actually making a positive difference to young people around Stoke-on-Trent.”

Thanks to help from Groundwork UK, the film will be used in schools around Stoke to promote good sexual health, reaching around 6,000 young people.

“We had such a great time making this film, and it has helped us tell the story we have wanted to tell for a long time. We cannot thank the Fixers team and everyone who took part enough.”