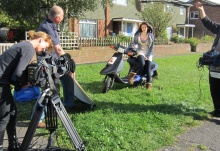 At only 16-years-old, Jade Clement, from Poole, has felt the psychological impact of cannabis from her own drug problem.

“I lost all my friends, including some of my best friends, because I took drugs,” she said. “When my family found out, I lost a lot of trust with the people I loved the most.

“It got to the point where all I would do with my boyfriend is just smoke weed, and I was missing out on so much. I felt distant, and different. Teenagers do not get told the blunt truth of drugs, but I have been through it and I want to show them the monster drugs can make you become, not just in yourself but to everyone around you.”

Jade started smoking cannabis when she was just 13-years-old and was using the drug daily by the time she was 16-years-old.

It was only when her mother found out she was addicted to cannabis that Jade decided to give up the drug at 16-years of age.

“I was so ashamed when my mum found out,” she said. “I remember we argued so much, but I knew all along she was right. I was missing out on my life and had to give up.”

The film is set as a game of Russian Roulette. The ‘players’ represent drug users who are unaware whether or not they will be the ones to be hit with the ‘bullet’ of drug use.

“I wanted to use this setting to show how drug users can never be sure or not if, or when, they will be hit by addiction,” she said.

“The bullet symbolises addiction in this dark game of chance. It shows how immediate addiction can be, and how it is impossible to control.”

The film is currently in the production stages, but Jade hopes it will be broadcast nationally once it is completed as a learning aid in schools, colleges, and advice groups.

“Getting involved with Fixers has been really important to me because I can get the message out that I have been trying to promote for years,” she said.

“I want to show that while people maybe are curious about drugs, it is not worth the risk of taking the drugs. I want to take this to parents and teachers also, to show them about drug misuse because they can be very judgemental about drug abuse.

“Drugs are about gangsters and glamour. The real problem is addiction. It is not cool and big. It is dangerous and not worth getting involved in.”

Jade is also hosting a variety of workshops to youth groups across Dorset with the hope of encouraging them to stay off drugs.