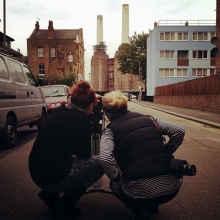 Two groups of young people in London are already getting their Fixers projects underway.

The first group sees Deborah (22), from Edmonton, and her group of 13 Fixers tackling the issue of mental health among young people.

The group aim to produce a film detailing the effects of mental health on those experiencing it, and just how you can detect the first signs of psychosis. They aim to create a powerful and thought provoking story to raise awareness of mental health and let others know what help is out there.

The second group takes a completely different stance, and sees Dante Powerson (21) and his crew of four Fixers (pictured) in Stockwell developing a film on knife crime.

The group have previously produced films over the past few years, and are currently developing a script that looks at the subject in a unique way, as they seek to show how knife crime damages your reputation and causes problems beyond the lives of those involved.

These projects are just two examples of issues young people around the country feel strongly about, and are the first in a long line of exciting upcoming projects.