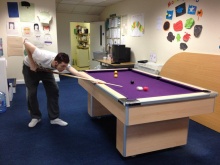 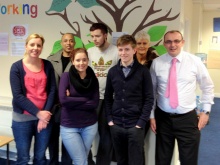 Connor Mann (23) from Tees Valley says he knows first-hand the damage you can cause yourself by bottling up problems - and he’s had plenty.

When he was 10-years-old, his parents died from a drug overdose following years of drug abuse. He went to live with his granddad, but then he too died when Connor was just 12-years-old. Connor says he then spent troubled and lonely teenage years in care.

Connor says it was his decision to shy away from talking about the issues which caused more harm than good.

“My parents died when I was young, due to drug abuse,” he says. “I got in trouble with the law and used to find it difficult to have relationships, get a job, or talk to people.”

Yet a call to the Children’s Society helped Connor deal with the problems he faced, and helped turn his life around.

Connor began talking to the counsellors from the society, began to open up and make friends with others in the local area, and even learnt new skills, including enrolling on a college course.

“I really wanted to make this film to show that bad things have happened in my life, but that you can turn it around by talking,” he says.

“I’m really enjoying my college course now and I am so pleased I talked to someone,” he said. “I just want to thank everyone for finally listening because it has changed my life.”