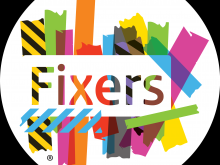 Former Fixers’ staff taking over the running of the charity have today been named as Wes Erpen, Emily Cutter, Miriam Barker and Stephen Fenning.

The former Young Person Coordinators (YPCs), who will be assisted by a wider group of volunteers with detailed knowledge of GDPR, safeguarding and design, have thanked the current Trustees for their careful consideration and belief in their proposal to maintain the Fixers website, YouTube channel and social media channels.

The four new trustees collectively have 22 years’ experience working with Fixers, and have worked closely with vulnerable young people to create the projects they are now preserving. Voluntary support will come from six former staff members including Julie Buck, Lee Scott and Izzy Hammett.

When a decision was made to begin an orderly wind-down of the charity this group submitted a considered proposal to save the resources.

Wes Erpen, who will be the group’s interim chair, said: ‘We are extremely grateful to the trustees for their careful consideration and belief that our proposal was in the best interests of the young people we have worked with. We are pleased to have the support from them moving forward, with a small number of trustees continuing on the board for a transitionary period of time.’

Last week the Board of Trustees announced the Public Service Broadcasting Trust (Fixers) will be continuing under new leadership.

A slimmed down version of the charity, with the sole purpose of keeping the archive intact and accessible to all, will continue to be run by volunteers and a new, independent group of trustees.

The new group of trustees is aware of discussions taking place on social media about the future of Fixers and want to make it clear they intend to maintain the status quo. Nothing in the immediate future will change.

It is their intention to engage with former Fixers, including those who have shown such passion in preserving the charity’s resources, over the next 12 months and they request time and patience while they take over the reins.

From October 1 the new group can be contacted via legacy@fixers.org.uk