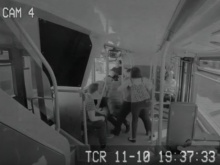 The film features a re-enactment of the attack. 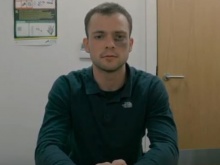 A scene from the film highlighting the fact LGBTQ+ hate crime remains a problem. 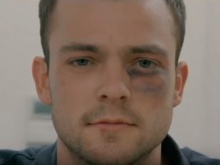 An actor from Ashley's film.

He was the victim of a homophobic attack that caused widespread shock and outrage across his community.

'Ashley' - who does not want to be indentified - was violently assaulted by a stranger as he travelled on a bus.

In a bid to highlight the fact that LGBTQ+ hate crime remains a problem in 21st-century Britain, Ashley has made a film with Fixers.

‘My main motivation is to turn a horrible event into a one that inspires positivity and hopefully can make more people aware of the issues still going on today,’ says the 18-year-old.

‘I want people to know that the LGBTQ+ community isn’t going anywhere, and those who are rejecting it can either move on and live and let live, or keep their issues to themselves.'

Suffering extensive bruising and swelling as a result of the attack, Ashley has also been left with psychological scars.

His assailant was sent to jail for 18 weeks after admitting the assault.

Ashley is hoping that his film will encourage other victims of hate crime to report such incidents to the police.

‘I was getting on the bus and was minding my own business when I was attacked by someone for no reason whatsoever due to my sexuality,’ he says.

‘No one intervened and I was verbally assaulted and then physically assaulted too.  I am doing this so that people are more aware that these kind of attacks happen.’

He says: ‘Ashley is an inspiring and brave person and using his experience to help raise awareness of hate crime in order to support others has helped him to process what happened to him.

‘Whilst the conviction of Ashley’s attacker was a very positive outcome, convictions are never the end of the story.

‘It’s always important for us to help victims process what has happened to them, whatever that journey may look like, and the partnership with Fixers has been a really creative process which we have all learned a lot from.’

Ashley adds: ‘I really didn't think things like this would still be happening in 2019.

'I never thought I would witness a hate crime let alone be a victim to one. I want people to understand that it isnt ok to be victimised due to your sexuality.'

This project was funded by Avon and Somerset Police Community Trust.