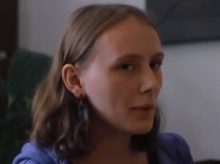 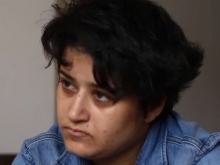 Lou has made a film with Fixers 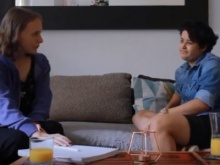 Lou wants to prevent other non-binary people being bullied

“You don’t have anything to be afraid of because we’re just like you.”

Lou Rapado Evans, 18, is non-binary and wants to help people understand exactly what this means.

So they (Lou prefers to be referred to as ‘they’ rather than ‘he’ or ‘she’) have made a film with Fixers to do just that.

‘I am non-binary and although my family accepts it, other people have called me names,' says Lou, from Swansea.  'I want people to understand that it is ok to not identify as a specific gender and we are not freaks.'

‘Non-binary’ is an umbrella term for people whose gender identity doesn’t sit comfortably with ‘man’ or ‘woman’, according to LGBT charity Stonewall.

Non-binary identities are varied and can include people who identify with some aspects of being male or female, while others reject them entirely.

Lou doesn’t see themself as being male or female, it’s more a case of being somewhere in the middle.

Their Fixers film sees them discussing the issue with someone who is questioning their gender.

‘I'm hoping that because this video exists, other non-binary people like me won't be as severely bullied as I was because there will be more awareness and acceptance,’ adds Lou.

Aspiring writer Lou, who also wants to train to be a teacher, says their project has in part been inspired by an incident when someone shouted insults at them in the street.

'I was called ‘a faggot, a tranny and an alien just because I said that I was different’, Lou recalls.  ‘All of his friends were laughing and saying, “Look at the freak, what a weirdo”.  It made me feel pretty horrid.

‘If someone else is being bullied for being non-binary, they can show this video to people to make it stop before it gets any worse.'

‘My message to parents is "We are here. We are queer. You don't have anything to be afraid of because we're just like you.’