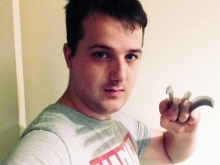 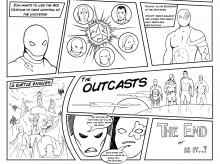 Asa has designed a comic book 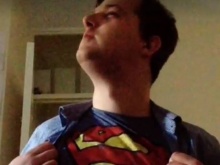 ‘Superheroes take pain and suffering and turn it into a force of power – that is what I have done.’

Asa Taylor suffers with anxiety. Nasty bullying at both primary and secondary school; trouble at home and a relationship breakdown have all contributed to his poor mental health.

But Asa is refusing to let it define him.

The 24-year-old from Maidstone has designed a comic book for other people suffering with anxiety.

He hopes it will help people take a positive step in the right direction in tackling their mental health.

‘This comic book is for anyone who wants to not let Anxiety hold them back,’ Asa explained.

‘Anxiety may never go away, but confronting it is the first step forward.’

Asa doesn’t remember when he first started suffering with anxiety, but knows it has always been a part of him.

A tough upbringing, leading to his estrangement from his mum and dad made growing up hard.

He was also bullied at school, which he admits has not helped his anxiety.

‘I did not have support at school with this, I was told to ignore it by the teachers, but nothing ever changed,’ he explained.

Asa now works at Home Bargains, and describes his colleagues as his work family. They have all been incredibly supportive of him, but at times Asa feels very alone.

‘The biggest problem I have is social isolation,’ he explained.

‘I live alone and I do not have anyone to talk to. I do things to take my mind off it, like go for a walk or listen to music. Sometimes I draw.’

The act of drawing has been very therapeutic for Asa, and it was for this reason he chose to design a comic book, which can be coloured in.

Some of the superheroes are based on people in his own life.

Asa’s final message to other young people is to live by his moto of ‘Imperfection is Perfection.’