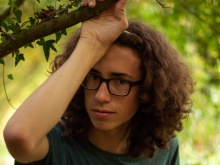 Marcus Allen is highlight the signs that someone may be feeling suicidal. 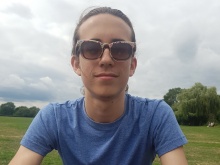 Marcus has suffered from depression himself. 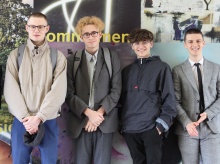 Marcus (second left) with some of the actors in his Fixers film.

That’s the message Marcus Allen is sending out to highlight the signs that someone may be feeling suicidal.

He has made a film with Fixers to highlight how even the closest of friends can often have no idea that their mate is feeling desperately low.

‘People don’t always show how they are feeling and say they feel fine even if they are going through hell,’ says Marcus, 17, from Tonbridge.  ‘It’s very common for their friends to be completely in the dark.’

His project has been inspired by his own personal experience of severe depression when he was studying for his GCSEs.

The student – who says he was bullied at school - felt so bleak that he contemplated suicide on several occasions.

‘I had always felt bad: like I was stupid, ugly and worthless,’ he says.  ‘The bullying validated these negative thoughts.

"In my own situation, I think it would have been very helpful to have people who felt able to talk about sensitive issues so that I would have been comfortable approaching them,’ he says.

‘To have friends truly supporting you can feel great.’

With suicide the biggest killer of men aged under 45 in the UK, Marcus believes lives could be saved if more people were aware of the warning signs.

A change in someone’s personality and behaviour might be a sign that they are having suicidal thoughts, say charity Rethink Mental Illness.

These can include becoming anxious, irritable or confrontational; having mood swings; acting recklessly; sleeping too much or too little; isolating themselves; having more problems with work or studies and saying negative things about themselves.

Checking in with and listening to people who are feeling suicidal can help to show them that you care about them and that they are not alone.

In Marcus’s Fixers film, a group of friends are stunned when one of their group takes his own life as they never checked in with him about how he was feeling, despite changes in his behaviour.

‘People often say, “I’m here for you”, but then they don’t follow up on it,’ explains Marcus.

‘Then there are some people where it might never cross their minds that their friends could be feeling low.

‘One of the most important things you can do as a student is to make sure your fellow students are ok.

'If you notice any change in your friends, you should make sure they’re alright because something could be going on in their life.

‘Showing them that you care might give them a reason not to take their own life in the most extreme of cases.’