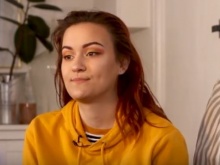 Kayleigh Clinton was terrified to come out to her family. 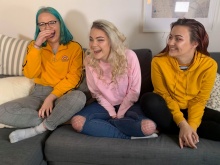 Kayleigh (right) appears in her Fixers film with her friends Ellie and Leanne. 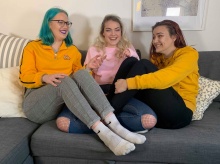 Kayleigh (right) wants to tell young people that coming out doesn't have to be a big deal.

For Kayleigh Clinton, the prospect of coming out to her family was terrifying.

But when she finally told them that she was a lesbian, the 17-year-old got such a positive reaction that she wished she hadn’t worried so needlessly.

So Kayleigh has made a film with Fixers to spread the message that coming out doesn’t have to be a big deal.

‘I misjudged my situation, and thought that my family would be opposed to me coming out, but I was wrong,’ says Kayleigh, from Ashford.

‘My mum was the most supportive person of all and told me she was proud of me for doing it.’

Her film is aimed at teenagers because it is during these years that people usually start to explore their sexuality.

‘Lots of people may ruminate on the idea and build it up to a point where they believe the backlash could be heavy, when in most situations it wouldn’t even be close to being that bad,’ she adds.

Kayleigh says she struggled to find much support on the subject when she was agonising over whether to come out, so hopes her film will help to fill the void.

It shows her discussing being gay and coming out with two of her friends.

‘I want to help people to assess their situation, so they can figure out for themselves whether it’s safe for them to be open with the people they are around,' says Kayleigh.

‘If they think there won’t be any bad repercussions in coming out, I would say just do it because you don’t have anything to lose.’

For Kayleigh, the first person she eventually came out to was her best friend at the time.

A year later, in June 2017 she plucked up the courage to tell her family through a post on Facebook.

‘I wrote:  "Your friendly reminder this Pride month: roundabouts are not straight and neither am I".

‘I decided to do it this way because I have a lot of family and it would take too much time and effort to come out to them all, it’s not even that important.

‘For the most part, it was positive feedback, but my mum had one or two family members call her to ask, "Does Kayleigh not like me? She didn’t say anything personally!"

‘My family were really good about it.  Coming out was quite easy once I did it, it just took courage to actually tell people as it was something I had grown used to hiding.’

Kayleigh hasn’t looked back since.

‘I can be so open with my family now that they know, I can tell them about relationships, girl issues, anything.’