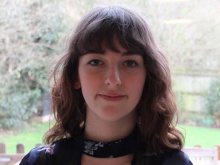 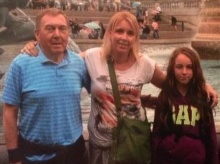 Emily with her mother and grandfather in London 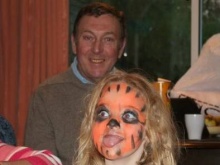 Emily on her 4th birthday with John

A young woman who watched her grandfather slowly deteriorate through Alzheimer’s has made a video to help others in a similar predicament.

Emily Lumley adored her Granddad, John Lear, who became a father figure when her dad left.

The 17-year-old, from Maidstone in Kent, has fond memories of being chased around the house by him and watching his funny jazz hands dance.

But as John grew older he fell victim to the cruel memory disease Alzheimer’s and his family watched him slowly deteriorate until his death last year aged 81.

By speaking out about her experience Emily hopes people will understand Alzheimer’s better.

‘With other diseases like cancer everyone knows about it, but no-one knows about Alzheimer’s and if they do they don’t really understand it,’ the A-level student explained.

Alzheimer’s disease is a type of dementia associated with an ongoing decline of brain function. It can affect memory, thinking skills and other mental abilities. The cause of it is still unknown, and there is no cure.

As John’s disease progressed, Emily’s grandmother found it harder and harder to care for him. There were times the family travelled to his home in Harpenden to help out, but this meant Emily missed a lot of school.

She found the lack of support and help available not just to her but all her family alarming.

Kate Sargeant, Alzheimer’s Society services manager, said: ‘It’s really important not just to suffer in silence as a family and think you are the only ones because you are not.

‘If you reach out for support and reach out to local support groups and meet other people in the same situation then you will learn a lot because that will be really helpful to you and will take some of the pressure off.’

Emily hopes her simple message will help others. ‘If you know someone that is dealing with any kind of dementia do not be frightened of them and treat them like a human being,’ she said.

‘This disease is not a choice and there is no cure. They need to know their friends will be there for them, that they will not shy away or distance themselves.’

This project was funded by the Colyer-Fergusson Charitable Trust.