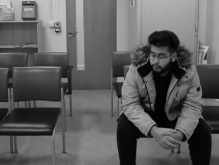 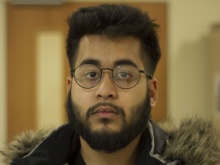 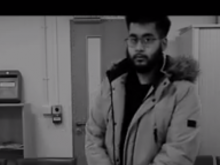 Adam Shaikh was forced to wait 18 months for a referral to the mental health team. During this time he was offered no support and his mental health deteriorated.

The 21-year-old from Smethwick hopes his music video will help others facing an endless wait for help.

‘My message to people is to take baby steps and you can do it; I want to be that example,’ he said.

Adam’s troubles began when he was just eight-years-old and suffered a significant trauma while on holiday.

He believes the trauma, coupled with problems at home, caused a breakdown of his mental health.

At 15 Adam wasn’t sleeping or eating and started to make bad choices.

‘I did not know who I was anymore,’ he explained. ‘I did not know how I could feel better and the outlets I chose were not good for me; I became a product of my environment.’

Eventually the weight of keeping the abuse a secret for nearly ten years became too much to bear, and Adam told his parents what had happened.

‘I just couldn’t bottle it up any longer, it had messed with me for too long,’ he said.

His parents were incredibly supportive but Adam’s mental health had already taken a toll.

Adam decided to seek help and went to his GP. He was put on a waiting list for adult mental health services and was told he would be seen within three months.

He actually waited 18 months for his first appointment.

As time ticked past and Adam’s mood lowered he was put on anti-depressants, but felt these messed with his motivation.

He ended up missing a lot of university and has now taken a leave of absence from his final year studying English Language and Literature at the University of Birmingham.

‘I grew up reading comic books and wanted to be Spiderman; my life has not been that, it has been a tough ride,’ Adam said. ‘If I had had regular check-ups with someone it would have helped.

‘The NHS needs to do something about these waiting lists, there needs to be a change in the way things are done.’

Adam hopes his film, in which he raps about the impact the wait had on him, will help doctors talk to their patients about steps they can proactively take to help themselves during the long wait for help.