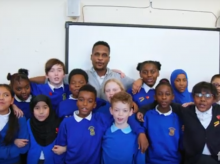 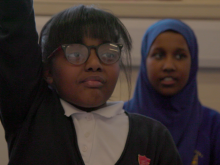 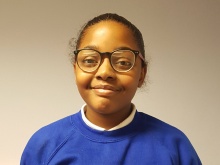 A group of primary school students are educating parents and children about food poverty.

The group from Rockmount Primary School in Croydon, London, have shared their personal experiences in the hope it will change people’s perceptions of the issue.

Janan Gill, 11, was part of the group and said: ‘I hope it will spread the word about the problem, and make people realise it is happening everywhere.’

The video was created as part of the Children’s Future Inquiry, which focuses on the food situation of children living in poverty in the UK.

Year 6 pupils at the school studied the issue and were shocked to discover it happened not only in their country, but in their school.

Janan explained: ‘We want people to notice what is going on around them.

‘When I was younger things were difficult at home. I remember my mum would have not much money to buy things.

‘We used to save up all the 1p’s and 2p’s and use the silver coins to buy food. But the money would rarely go to the end of the month.

‘It made me feel hungry and worried and I did not talk to my friends as much. I did not want them to know I was hungry.

‘People think food poverty is a problem in Africa, but they are wrong. It is happening in classrooms, it is everywhere.’

Fixers helped the students at Rockmount produce a short video about the topic. They have shown it in assemblies to help educate people about what food poverty is and how it affects others.

The youngsters will also be holding workshops with their peers.

Annette Schembr, a teacher at the school who has been supporting the project, said: ‘This is all about awareness. Many of the children at the school did not know what it was.’

This project was funded by the Food Foundation.