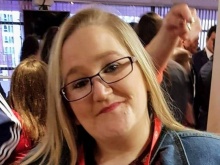 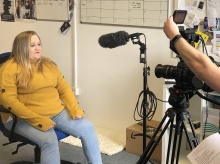 She found support in football 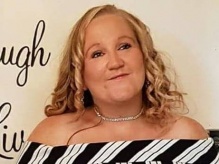 Claire is encouraging others to be positive

Claire Rogers has a message for young people going through a tough time.

“Never give up!” she says. “Keep hold of your hopes and dreams and just go for them. You will get better days.”

Claire, 30, from Swansea, knows what she’s talking about. She became homeless in her early twenties after falling out with her family.

She remembers the first night: “I bedded down beside some rubbish bins. It was freezing and I didn’t really sleep at all. I got in with the wrong crowd and just spiralled really.

"I got to live in a hostel and thought what’s the point? There’s not really any point to living now. I’m in the gutter. There’s no coming back from this.”

But Claire was wrong. A friend introduced her to Street Football Wales, an organisation which promotes social inclusion and encourages people to take an active role in their own lives. Before she knew it, she was off to Poland for the Homeless World Cup.

“I was just ecstatic,” she remembers. “As soon as you put that Welsh shirt on and play for your country, no matter what level it is, you feel like a star.  I felt I’d been given an opportunity in life.”

It wasn’t to last. Along the way Claire had been given a funded position with Street Football Wales. Then the funding ran out.

“It made me hit a low point again. I thought – well I’ve had my opportunity in life and now I’ve lost it. I’m back to where I was.

"I thought I was going to become homeless again. I started drinking again. There was no help at all. I was in this really dark hole, drinking, self-harming.”

But Claire didn’t give up.

“I thought I’ve got to suck this up. I’ve done it once and I can do it again. I found a job with a call centre and was there for three and a half years. And now life has never been better really.”

Claire is now employed  as a Support Worker. It’s something she has wanted to do since she was herself helped.

She explains: “Since being homeless and living in a homeless hostel and seeing the support they give, I just wanted to give something back myself really. It’s what I’ve wanted for years and I’ve finally got the opportunity to do it.”

Fixers has helped Claire make a short film telling other young people about her experiences.

“Take any opportunity you’re given, because each step in the road will take you a bit further," she says.

"Life is a roller coaster – you go up, you go down. You never stay there. It’s never just one flat line.”

Another dream could be about to come true. The Homeless World Cup is being held in Cardiff later this year. And it’s possible they’ll be showing Claire’s film to a world-wide audience.

This project was funded by the Balcombe Charitable Trust.