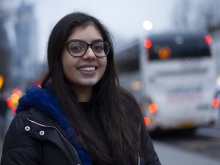 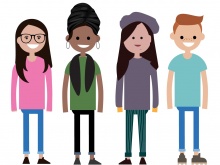 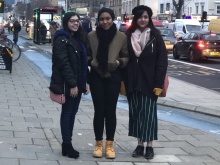 “Ever since year 7 my life has been controlled by depression and calorie counting. It made me self- obsessed with everything to do about my appearance. I’ve struggled to enjoy my school years due to this and even today I still struggle with it….”

Alfie Greenwood’s part of a body image group for young people, set up to help its members deal with their eating disorders.

They’ve got together with Fixers, the campaign that gives young people a voice, to help explain exactly what calories are and why healthy eating is so important.

Athena Bashar’s another member of the group.

“I used to use my phone to calculate and measure calories all the way from big meals to a piece of gum,” she says. “And the worst part was that I didn’t even understand the word ‘calorie’. It was like using a word daily and not understanding its real meaning.”

She says: “Ever since I had depression and anxiety in year 7, I only ever remember thinking I was ‘fat’ when in reality I didn’t even know what ‘fat’ was. I didn’t realise that ‘fat’ and ‘calories’ were something needed, and something to help your body have energy. We want young children to think differently about what calories really are and understand that everybody is different, therefore every person will consume different amounts of food – and that’s okay.”

Mahveen is currently studying for her A levels and wants to read psychology at university.

“I know people who right now would rather revise than eat but you don’t need to be worrying about how much you eat so much as whether you’ve got a healthy diet. Are you having enough fruit and vegetables rather than lots of unhealthy junk food?”

The emphasis on calories was drawn from the body image group’s own experience.

Says Mahveen: “We thought if we concentrated on something like calories, we could really benefit young people who see things on social media about calorie counting. We highlight that calories aren’t bad. It’s just a measurement that’s used on food labels and things. They are just perceived as bad. We have to feed out bodies but a lot of people don’t understand that.”