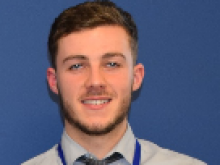 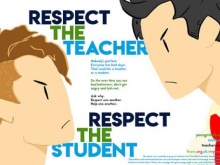 “My job is to make sure the students come in with a smile and leave with a smile and that they learn a couple of things. And then hopefully they go back home and say I’ve enjoyed school today!”

It’s a unit which helps children with behavioural problems who are on the verge of being permanently excluded from school.

“There’s one child who comes from a really deprived area and he’s been kicked out of two schools,” explained Ben, from Huddersfield.

“His attendance was shocking but after coming to The Bridge his attendance is over 93% and now he does amazing work in his core subjects.”

Ben is always looking for new ways to make things better for both pupils and teachers.

Fixers has helped him and some of the young people he works with to design a poster.

Ben explains: “There’s a picture of a teacher and one of a pupil and they’re both looking at each other in a confrontational way. The headline text says RESPECT THE TEACHER - RESPECT THE PUPIL and underneath it says ‘Nobody’s perfect. Everyone has bad days.’”.

The poster goes on to say that teachers and students should try to respect and help each other.

“The main message of the poster is mutual respect,” he says. “That everybody’s got to work together as a team.”

Ben says the pupils were really engaged in designing the poster and teachers at the academy have been positive and supportive about the project.

The poster is going up at various locations around the school, including Reception, the sports hall and the staff room.

“I’d like them to go up all over the place. Because it’s a universal message and we need to make as big an impact as possible.”

This project was funded by One Community.