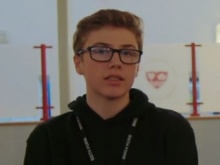 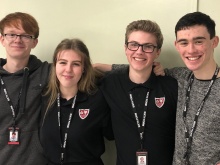 Charlotte and Liam (centre) were aided by Rhys (left) and Nathan (right). 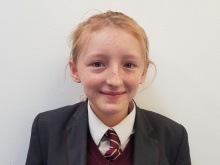 Fayeth Jones featured in the video and attended the Westminister event.

A group of students from Prestatyn High school are campaigning to reduce the stigma around accessing Free School Meals.

Led by Liam Thomas, the group have created a video to encourage students suffering from food insecurity to embrace free school meals without feeling embarrassed or ashamed.

‘We want to reduce the stigma around free school meals, so that people aren’t afraid to ask for help,’ says Liam, 16. ‘A lot of people find it embarrassing, but we want people to realise the meals are there to help and to use these meals if they are struggling with food issues.’

The students feel the words ‘Free School Meals’ are off-putting due to the negativity associated with not being able to pay.

Instead they suggest removing the word ‘free’ from the title and have proposed schools should provide free meals as part of an ‘Educational Food Allowance.’

‘People don’t like not being able to afford things,’ explains sixth-former Charlotte Furber, 16. ‘If we remove ‘free’ from the title, they may feel less worried about accessing what is available. Students don’t seem to mind accepting maintenance allowances, and I think that’s all because of the name.’

Neither Liam nor Charlotte have suffered directly from food poverty issues, but say it is their empathy for those struggling that inspired them to take part in the campaign.

‘I can’t imagine not being able to afford food, and that’s why it was so important for us to raise awareness,’ says Liam.

Their project is part of a larger conversation on food poverty that will inform the Children’s Future Food Inquiry. An estimated 4.1 million children are living in poverty in the UK but it’s not known how many children experience food insecurity and how it impacts their lives.

The film was shown to politicians in Westminster during an inquiry evidence hearing last week.

Fayeth Jones, 12, from Rhyl, was at the event and appeared in the film. She said: ‘I am a young carer and a volunteer at Kings Storehouse Foodbank. Everyone should have the same chance in life and not go through food poverty. Everyone should know about healthy diets and should be educated that not everyone can afford to get food.’

Their Project was funded by the Food Foundation.