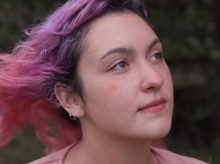 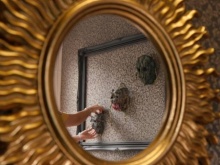 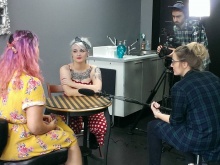 'I have issues with smells and hearing and that will send me into breakdowns – so screaming, crying, just sitting in a corner. They didn’t know it was autism at the time. I live in the middle of nowhere in Wales. It’s the sort of thing that people don’t know about.'

Lily Beer-Doblon, from Aberystwyth, wants to tell people what it’s like living with autism.

She says there are a lot of stereotypes about the condition which simply aren’t true.

Her story was broadcast on ITV Wales with the support of autism campaigner Carly Jones.

'People think that people on the spectrum are amazing at maths,' she says. 'I’m not. Most people will say I’m  good with social situations but I really struggle with them.'

As part of her Fixers project, 21-year-old Lily plans to use a series of masks she has created.

She explains: 'The first mask is the mask I put on in the morning before going out. It’s untouched by any of the issues I suffer from in life.

'The second mask is me forcing myself to conform to neuro-typical standards. The third mask is the result: burn-out at the end of the day.'

Lily also wants to highlight the fact it can be difficult for women to get a diagnosis of autism. She compared notes with Charl Davies, a well-known tattoo artist who was eventually diagnosed after years of mental suffering.

Charl says: 'I was turned away by one doctor when I actually suggested I might have autism. I think it’s because females are generally better at hiding their traits and diagnoses are based mainly on male traits. This means women are massively undiagnosed and misdiagnosed.'

Lily and Charl’s experiences are backed up by Louise Albert from the National Autistic Society Cymru.

'We know that autism is undiagnosed in women and there’s some really key features why that’s the case. In females they’ll very often give more social signs that they are fitting in with the social norm. Whereas males very much will show that they’re not fitting in and they’re more isolated.'

'I’m aiming my project at the public but also professionals,' says Lily. 'I think people lack an understanding of autism and I also think there are many more of us out there than was previously thought.'