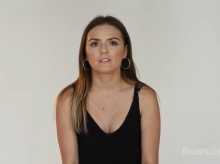 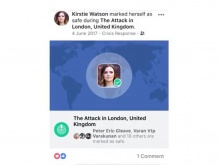 Kirstie marked herself as safe during the attack 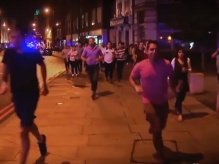 A terror attack survivor wants waiting times for support to shorten for people who experience a traumatic event.

Kirstie Watson, 22, who has struggled with Post Traumatic Stress Disorder (PTSD) since witnessing the London Bridge terror attack on June 3rd last year, says help should be made available sooner than the nine months the NHS stated.

‘I was told that I would have to wait longer than nine months for the trauma to ‘take effect’, and nine months was the minimum, it could take longer,’ explained Kirstie, from West Yorkshire. ‘I understand why they make people wait nine months to ensure it is definitely PTSD, but I also feel like these issues should be nipped in the bud early to prevent further suffering.’

Kirstie had just started travelling alone and was excited about going to London for her first official acting job.

Unfamiliar with her surroundings, Kirstie finished filming and headed to a coffee shop she had previously spotted across London Bridge.

A trio of terrorists ploughed into pedestrians on the bridge using a hired van, before stabbing revellers in pubs and bars in Borough Market.

The attackers killed seven people and injured 48 but were shot and killed by police within eight minutes of the first 999 call.

Kirstie added: ‘I remember just running, I ran back to my hotel room and everything was just a blur.’

Kirstie was inspired to start this project after seeing she wasn’t alone and other terror attack victims were not receiving appropriate support in good time.

She hopes her experience can help gives others some tips for coping whilst waiting for an official diagnosis.

‘I saw terror attack survivors on TV and the people didn’t know where to turn. The waiting list was so long, and I knew I had tips that might be able to help others that have gone through something similar,’ Kirstie explained.

The NHS revealed PTSD can affect more than a third of people involved in a terror attack.

Since working with Fixers Kirstie has been inspired to study creative writing and film studies next year and help others share their personal stories.

Kirstie added: ‘I think other people in my situation should go out and live life regardless of what may have happened. The biggest thing people fear is the ‘what if’ and this will stop people enjoying their life.

‘It’s also very important to make sure to see or speak to friends often, this can really make a difference.’

This project is funded by NHS England North.