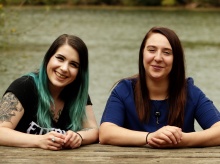 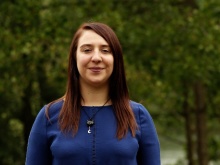 Lucy has struggled with derma all her life 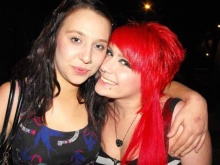 The girls have known each other for nearly a decade!

Two friends who both suffer with a skin picking condition have teamed up to get young people to understand it really does exist.

Mary-Anne White and Lucy Wills, both 27, have been diagnosed with dermatillomania (derma) which is characterised by repeatedly picking, squeezing or scratching your own skin, to the extent damage is caused.

‘The reason we decided to do this campaign was because Lucy and I struggled with derma for years and we turned to each other a lot,’ explained Mary-Anne, from Manchester. ‘We found having peer support so important.

‘We both have had to explain this condition again and again to people and there’s a surprisingly high amount of people that suffer with it.’

‘I’ve always had derma, it started on my fingers when I was in primary school,’ added Lucy. ‘It spread to my face and your face is obviously something everybody sees and I was so ashamed.

‘On reflection, my derma got worse as different things were going on in my life and I started developing intrusive thoughts that were quite disturbing.  These thoughts were very self-critical and I found the condition was helping me find a release.’

They both admit skin picking was a form of control when they didn’t feel they had grasp of things going on in their personal lives.

Lucy shared: ‘When I was going through my diagnosis there wasn’t much online when I was researching and I struggled to find any information on it.

‘I joined Facebook groups for support and decided to create something where people can see they’re not alone and there is help out there.’

The two women met nine years ago but it wasn’t until Lucy was diagnosed that Mary-Anne realised she had the same condition.

Mary Anne: ‘I went to the GP after Lucy was diagnosed but she didn’t really understand what derma was – she had to go away and do some research on it.

‘I’ve found that a lot of people who struggle with the condition also struggle with different mental health issues like anxiety, depression or other forms of OCD.’

Mary-Anne believed the media’s portrayal of how people ‘should’ look had a negative impact on her mental health and made her feel she had to dig the imperfections out of her skin.

Lucy said: ‘We want people to know they are not alone and have nothing to be ashamed of.’

Mary-Anne added: ‘Those going through it need to remember they are beautiful just the way they are and nobody is perfect in this world, but that’s what makes you human.

‘What they might perceive as imperfections others will see as strength.’

About Mary-Anne White and Lucy Wills