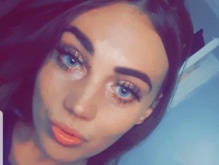 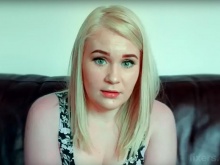 Watch Hannah's film at the top of the page for more information.

A woman who was hospitalised when her anorexia spiralled out of control is reaching out to others.

Hannah Lucas, 24, started dieting when she was 16 years old but admits the problem didn’t get serious until she was 18.

She has created a film to encourage young people to admit they have a problem and seek help.

‘I got diagnosed at 19,’ explained Hannah, from Brighton. ‘It took a lot to get diagnosed because the doctor said I was a healthy weight. They didn’t believe there was anything wrong with me.

‘After that appointment I lost 9 lbs in 2 weeks and they then started to take me seriously. I was referred to an eating disorder clinic 3 weeks later and even once I got there they said I wasn’t really anorexic because of my weight.

‘I decided to start campaigning because it shouldn’t just be about weight; I felt there was a problem with my relationship to food regardless of my weight.’

Hannah says eating barely enough to survive felt ‘normal’ but after a few weeks she didn’t have the energy to do the things she most enjoyed.

Hannah said: ‘I became more aware of my weight at the age of 18 because my dance teacher used to say that dancers had to be skinny. I would constantly compare myself to the girls in my class, and I was never as skinny as them.

‘I decided to lower my calorie intake and I was dancing all day on near to nothing. I soon didn’t have the energy to dance anymore and was taken out of the classes for my own wellbeing.

‘Now I know the more weight I put on the better my mind-set is, I know I’ll struggle for the rest of my life. It will always be there, I’m just learning to deal with it and that’s what’s important.’

Hannah has been to visit a therapist but thinks advice is best given by those who have personal experience.

She teamed up with Fixers and created a film titled ‘My Eating Disorder Nearly Killed Me’ with the aim to educate young people about the dangerous reality of living with an eating disorder.

‘My advice to anyone going through a similar situation is you need to admit you have a problem and genuinely want to get better, otherwise it won’t happen,’ explained Hannah. ‘It takes a certain mind-set to get you to that point in the first place and it’s going to take that determination to get better too. But it is possible.’

Anorexia & Bulimia Care (ABC) suggest over 1.6 million people in the UK are estimated to be directly affected by eating disorders.

The organisation proposes the true figure for those affected is approximately four million as so many who struggle do not seek help.

Hannah’s close friend, Rosie O’Neil, acted in her film and admits she also struggled with an eating disorder at a young age.

‘I approached Hannah in the street because I saw she was in a bad way and looked very ill. I said to her ‘I know what you are going through and I want to help you’ and we’ve been friends ever since,’ explained the 25-year-old.

‘People should try to seek help because it really can ruin your life.’