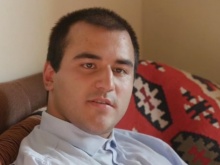 Refugees often come to the UK fleeing conflict in their home countries.

Darius wants people to recognise how refugees can benefit society.

Darius Nasimi was smuggled into the UK in a refrigerated container when he was only four months old, fleeing the Taliban regime in Afghanistan.

Nineteen years later, he wants to show how refugees can make a positive contribution to the countries they have come to call home.

‘Through this project I hope to show that refugees don’t just take stuff from the new societies they come to, but they also give something back in return for the hospitality the host society  has shown them’ says Darius, from Lewisham.

‘The mainstream perception being fuelled by the news portrays refugees as a burden on society.

‘I think Britain historically has a very positive reputation of supporting refugees and being a welcoming place, where refugees can come and rebuild their lives.

‘At the end of the day, the majority of the refuges who come to this country contribute as much as they can, to the economy, to politics, setting up their own businesses and as a whole I think we should be welcoming refugees, who have that aim and vision.’

Darius himself is studying Philosophy at Kings College London, where he set up the Institute for Central Asian Studies. He has also met with other refugees to talk about their experiences.

One fellow refugee, Maya Ghazal, said: ‘I know what it feels like to be in a new country with a new language. I used to hate the word refugee because of the negative and the way people used to stereotype the word, but now however I feel like it’s more of a word that represents resilience and strength.’

‘It’s unfortunate that some people can be quite negative and part of this comes from people misunderstanding who refugees are. People have come here because they are fleeing for their lives. We’re literally saving people’s lives and the work that Darius is doing is vitally important. Each new community that comes brings new cultures, new food and also can contribute their skills to our economy.’

Darius hopes his project will change people’s perceptions of refugees, and contribute to people seeing them in a more positive light, as oppose to as a burden.