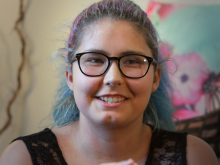 Kayley has moved a lot 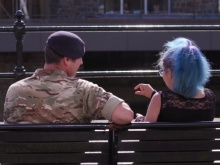 Her father is in the Army 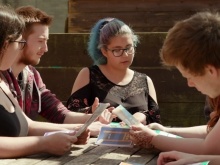 She has created a booklet to help others cope with change

Seventeen-year-old Kayley Walton’s currently based in Haverfordwest but because her dad’s in the army she’s been on the move all her life.

Kayley was born in Wales but moved to Germany when she was young. Several years later she was on the move again, this time to Catterick Garrison in England then back to Wales, on to Germany, then Yorkshire and finally back to where she was born in Haverfordwest.

She says it was relatively easy to make friends in new places but admits it was quite hard when it came to leaving. There were lots of positives too.

'The best part was seeing different areas because it was fantastic, especially in Germany,' she said.

'I also learned news skills from the constant moving here and there: settling down, going to new places, getting into new routines.'

Fixers has helped Kayley and her friends produce a booklet for young people, full of advice about how to cope with change in their lives.

'It’s not just about moving home,' she explains. 'It might be changing schools or maybe you’ve got a divorce in the family and you have got to deal with that, maybe adjust to parents moving out. So it is a lot more general than just moving.'

Maxine Thomas, who is Head of Safeguarding and Learner Wellbeing at Pembrokeshire College thinks the booklet will be really helpful.

She says: 'Kayley’s project is particularly valuable to young people in that young people are inspired by their peers and to hear from a young person who’s gone through a difficult time or a transition is inspirational to them and informs them of a pathway they can take.'

Kayley has one key message for all young people: 'My main message is don’t be afraid of change. There’s always going to be something good that you can get out of it.'